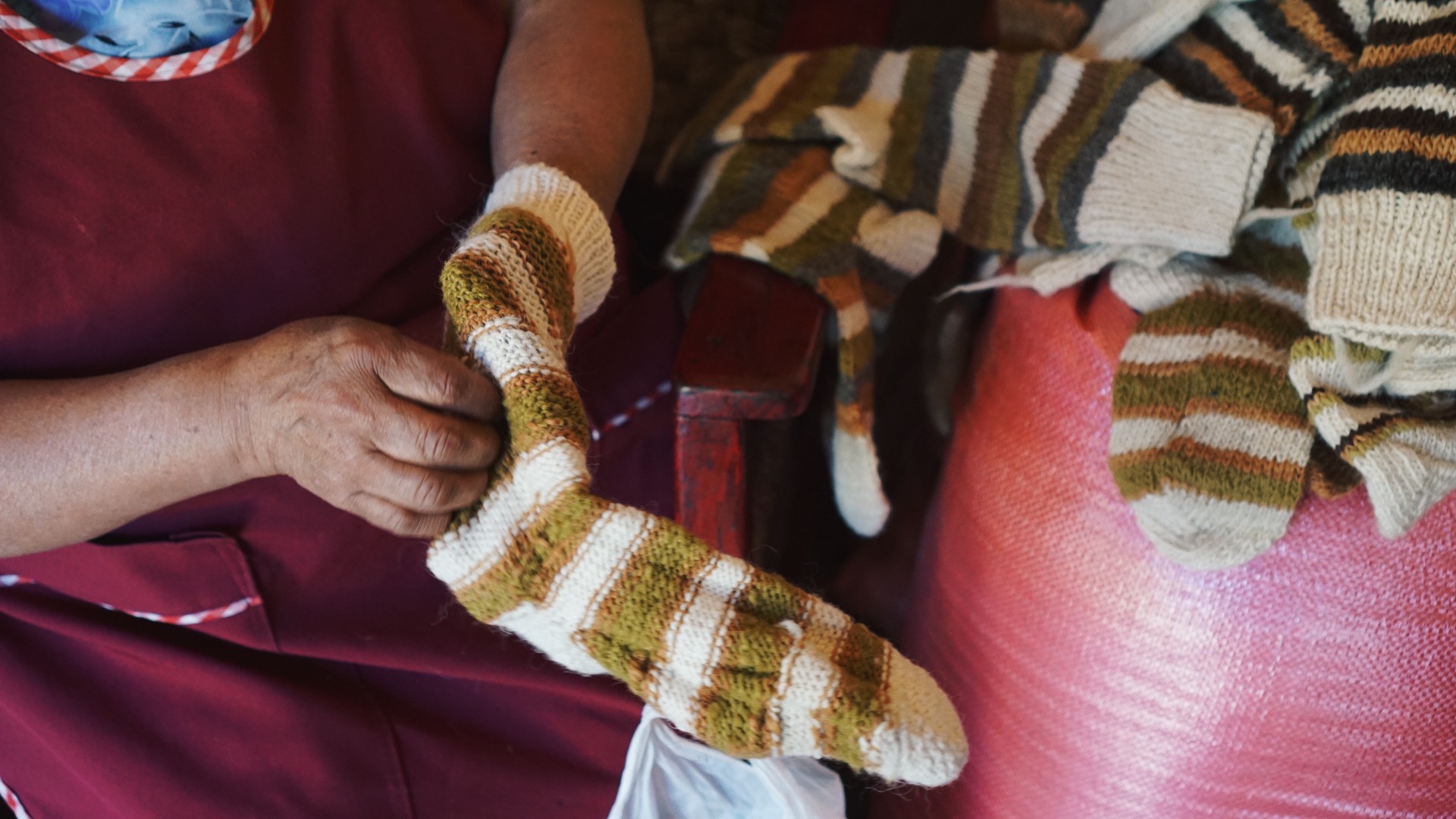 A week full of artisan visits!

We started out today with a bit of a delay because of Lemmy. I could tell Nick was worrying about the oil in Lemmy, and was trying to do the kilometers to miles math with the unreliable sticker in the upper left corner of the windshield. So after a couple of tries, we found a place that could change his oil and put a new filter in. With a thirty-minute delay, we headed into Chol-Chol for the Brazilians’ first day.

Matheus and Victor were already there when we arrived, so Nick started them off with the list of projects he hoped they could achieve by the end of their five weeks. After that, we had lunch and took Victor with us to visit Señora Rosa, which Susana had scheduled for us yesterday. Rosa showed us the dying process for wool, which they use all natural materials for dying.

Our drive there was an adventure in itself. It took us an hour to get there from the foundation, which is 25-30 minutes outside of Temuco. It was out in the sticks for sure. I wonder what life is like living out here. It was really beautiful and peaceful. I can see the appeal. But I also imagine it would be hard to get into town for groceries. I suppose the grass is always greener.

We arrived and Señora Rosa greeted us with some delicious peach juice (it reminded me of the mote con huesillo that I tried in Santiago, just without huesillo). We sat down and asked her the questions about her process before she took us out into her yard to show us the process in person.

Also when we arrived, her grandson emerged from behind the house with a giant knife (she must have been using it to cut the maqui from the tree). It was a pretty hilarious greeting.

Today, she was making a fantastic purple color made from maqui, a small purple berry found here in Chile. She had a large pot boiling over a fire in a shed. She chatted with us about her process while Nick asked her some questions related to how long certain things take to make, etc. She added the wool and let it sit for an hour. She then talked about how she spun wool after and what steps she took for that. I very much enjoyed learning about how she dyed wool. As a new knitting lover, I take for granted the yarn that I buy at Michael’s and really come to appreciate the time it takes to create her wool. You better believe I’m going to buy some skeins to take home. Sigh, I miss my knitting needles already.

Señora Rosa’s process started with boiling the water over a fire (although she usually does it in her kitchen), and adding the maqui berries. She waits for it to come to a rolling boil, then she adds the wool. She lets that sit for an hour, then she dumps the water and shakes the wool of the berries. She rinses it a few times in clean water, drops it in a machine to do the spin cycle only, then hangs it to dry. Voila!

I think Nick got a lot of good information for the start of his productivity project and I think Victor really enjoyed seeing the countryside and talking with Señora Rosa. He also spoke Spanish pretty well, and Nick and I were feeling pretty bad that our Spanish is still not great, haha. We still have 5 more months! I have confidence in us, there’s still time!

Today we started at the Foundation pretty early and Nick worked with the Brazilians to learn about their plans for one of their bigger projects: transforming the unused rooms at Chol-Chol to an intake center for goods and a place for the weavers to relax and hang out. I worked with Juan Manuel in giving him the next video to translate from yesterday and tried to make more progress on the logo. I’m a little behind on that because the videos take a majority of the time to travel to and from, along with the actual interviews, which can take up to two hours. I’m hopeful that I can make some progress soon though. There are a lot of projects running parallel and I need to make sure to keep them all moving forward.

Around noon, we headed towards Señora Graciela’s house. It was another gravel road adventure, but taking a different side on the main fork in the road. Nick has been great at driving to and from these interviews, I know it can be exhausting and stressful. Chilean drivers don’t hide their emotions and can zoom by on these gravel roads. But these roads also have another common situation that we encounter: lots of cows, haha. Yesterday we ran into them a couple of times, but today, we ran into a whole herd. And what we noticed was fighting was also turning into a larger cow orgy. I’ve never seen an animal that big get on its hind legs, I’ll tell you that. Well, maybe some rhinos at the St. Louis Zoo, but this was like whoa. That proved to be a bit of a delay, but we made it to Señora Graciela’s (after asking many locals the way as well; we can’t trust directions anymore).

We arrived to Señora Graciela’s and she greeted us with her two dogs. She led us out to her shed where she does a lot of her spinning. She usually works on scarves, or “bufandas” in Spanish, but she didn’t have any started today. She was a bit more reserved and quieter than the other artisans that we’ve met, which is totally fine! I think everyone’s videos will be a little different. Nick asked more questions about process and timing to make certain items, and which items she likes to make the most. We were a bit more efficient this time and were headed on our way a little after 2pm. Update: we found out that Spanish isn’t her first language, but speaks the native language of the Mapuche, so that could have also added to her quieter nature.

We had bought some sandwich supplies at a grocery store in Nueva Imperial, but hadn’t had a chance to make them. Juan Manuel mentioned that he knew “where we could find a knife” to cut our tomato and avocado. It turned out to be his aunt and uncle, who were beyond nice and offered us a little picnic in their backyard! It was so nice! They brought out water and ginger ale (and offered us cervesas that were oh-so-tempting!), and we had a nice, relaxing surprise of a lunch. His uncle came out and chatted with us a bit. Patricia (one of the Brazilian “interns”) was with us this time and she did very well speaking and understanding Spanish. From what I gathered, his uncle used to play professional soccer and was in Brazil sometimes, and was a bit familiar with Portuguese.

We didn’t want to overstay our welcome, so we headed back to Temuco, but not before his uncle offered for us to come over for a barbecue anytime we wanted – “maybe tomorrow??” Such nice people and I hope we can take him up on that offer sometime.

We headed back to our apartment and I attempted to dig more into the Google for Non-Profits project, but I keep hitting roadblocks with logins for access to their domain, etc. Sigh. Well, I put that aside for the moment and Nick and I headed to try out a yoga place nearby. We struggled our way through the introductions and found out it was Kundalini yoga (which neither of us had ever done). It was nice! Very interesting too. After class, we were a bit nervous to ask more questions about it until the instructor said, “I speak English if that’s easier.” Oh my gosh, those words provide such a relief sometimes, haha. We finished up and headed back to the apartment to make tacos (praise the Lord, we found Mexican spices and ingredients at the local Jumbo, which reminded me of a Super Target, and we have all of our Mexican flavors again!!!).

Nick and I started the day with a hike up Cerro Ñielol. We are trying to get faster for our 4-day hike we have planned in March in Patagonia. We cut 1 minute and 17 seconds off – whoo hoo! After that, we headed into the foundation. The Brazilians have been making a lot of progress on revamping those rooms, so I think Nick was pleased. I made progress on the logo and Google for Non-Profits (yay!). I have access to the mail exchange servers, so I think I have everything I need to finish the process.

We then headed in the car on our way to Señora Margarita’s place, who makes calcetines (socks) and spins wool. This ride was much less treacherous than days prior, but still required Juan Manuel to jump out and ask for directions at least three times (as expected). A nice man that turned out to be her neighbor offered to guide us there, so he hopped in the back with Matheus and I (and Juan Manuel and Nick in the front). We made our way and found Señora Margarita at the end of her driveway with a cute little sunhat and a big smile. My heart burst when I saw her, she is just the sweetest. She hopped in the back with us and we drove up to her house. I even got bit by some sort of insect but I didn’t care, because I was excited to capture her story. She truly loves knitting and you can see it. I loved to capture her smile. She offered us some Coca-Cola and we started the interview. Nick asked his questions about how long socks take and how much wool she needs for certain products. We found out that she doesn’t do the traditional weaving because her mother (who is also Mapuche) never taught her out of protection for being discriminated against in school. I’m finding that in a lot of the interviews, they mention how the general Chilean population treated them 30-40 years ago, and it’s sad that a lot of the culture is getting lost in that way. I really hope all the efforts that Nick and I are doing will help them, even in the smallest way.

We headed back to Temuco and it was a perfect day: 75 degrees and sunny. I mentioned I just wanted to be outside, and Juan Manuel mentioned, “We should have a beer.” He must have been reading my mind, haha. We dropped off our bags and headed to a beer garden that he told us about a bit farther out from the downtown area. It was really great; we had some steins outside and enjoyed a thin crust pizza.

We’re potentially going with Juan Manuel and Mily on another adventure again this weekend to the Valdivia and Osorno area. He mentioned about going somewhere that requires asking local fisherman for a 2-hour ride to an island. Sounds perfect – we’re in!