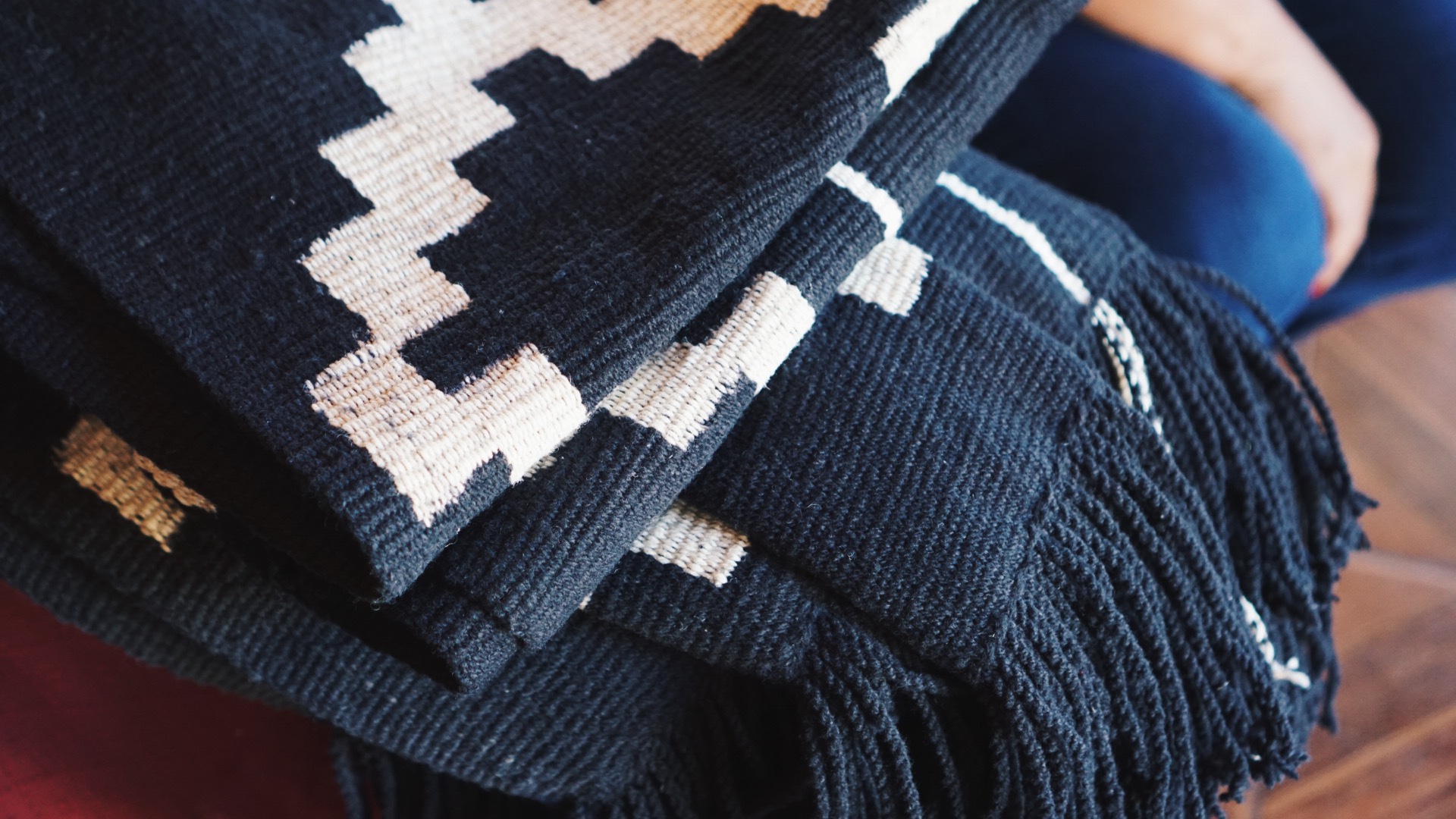 We (Juan Manuel, Sarah and I) were trying to arrive a little early on Monday to get a head start on the week. We assumed we’d be the first to arrive, but when we got to the foundation, there were already two artisans at the foundation waiting for Viviana so that they could drop off some of their finished products. Right after we put our bags down, a third arrived. Juan Manuel was talking with some of them and introducing them to Sarah and me (we have not met any of these three before), and he was talking about what we’ve been working on.

At that moment, a lightbulb came on and I suggested to Juan Manuel that we have them “try out” the new rooms that are closer to being completed to “receive” the artisans when they drop off their goods. We brought them over to the “lounge” room and served them tea/coffee while they waited for Viviana. At that point in time, Juan Manuel and I interviewed them for my productivity / process project. It was perfect. I was able to get three more data points in about 30 minutes of questions. I’m glad we got there early!

Viviana arrived and started to receive each of the artisans and was there to measure the finished products and start to put them into inventory. There ended up being about 4-5 more artisans coming during the morning to drop off products – it was pretty cool to see (especially since we didn’t know they were coming today). Sarah and I spent the rest of the morning on some other projects (Sarah working on videos and social media strategy, and me working on combing through some lists of foundations for possible grant requests later during the fellowship).

After lunch, Susana arrived and I worked with Juan Manuel to update her on the Microloan Excel file that I finalized with Viviana the previous week. Ultimately, the organization has about 130,000.00 CLP in loans (about $200) out with artisans. Unfortunately, I told them they probably need to write-off about 40% of that given its with artisans who have owed money for multiple years and they don’t work with the foundation anymore. I showed her how the file worked and how it can be maintained moving forward. That conversation led to some discussions about updating the contracts for 2019 with the artisans, more specifically detailing how much wool they can get in advance, updating some processes (e.g., when the finished product is turned in, Chol-Chol will subtract the loan amount of the final payment to keep people current), and potentially investing in some lower quality wool to give the artisans options (since they don’t all need the high-quality materials that the foundation currently has).

From there, I showed Susana the file that I previously mentioned that shows the “hour rates” of the artisans based on how long it takes them to spin and weave/knit their products. I’m not sure what kind of reaction I was expecting from Susana when she saw the amounts, but she wasn’t entirely surprised to see that some of the artisans make as little as 0.20 USD an hour for some products. She agreed that we need to take a closer look at each of the products, how long they take to make, the materials needed for them and ensure that the artisans are getting up to some more “proper” wages. I think this is where I will spend a good amount of my time in the coming weeks/month.

Lastly, she was asking me about any recommendations I had on changing some of the pricing of products. I said that was difficult without historical information that they don’t do a good job of keeping. Luckily one of the Brazilians is working on compiling some information from the last couple years that I can use to get started. Ultimately, I mentioned to her that they should consider using a POS software within the store so that they can just get automated reports much quicker. I had an appointment with Lightspeed POS system last week and they performed an hour demo for me. I thought it was pretty slick and intuitive and could really help the foundation. I’m still waiting to hear if it meets the criteria (e.g., they have Chilean pesos as a currency option) before further proceeding. Of course, the software costs money, but I think is affordable at $75 USD a month. While that may not sound like much to many, it’s a pretty sizeable amount to the foundation, so we’ll need to see if there are any current grants the foundation has that could help fund this project as well.

On Tuesday we arrived at the foundation to continue some of the work from yesterday. I’m almost done with another video, bringing the total completed to 4. The list keeps growing! Which is good. Juan Manuel is going to help us schedule some visits for next week with the artisans that came by yesterday, which is good.

By the way, Juan Manuel told us today that when the artisans were sitting outside waiting for Viviana and talking with Señora Isabel (who acts as a groundskeeper for the foundation), they were talking about how the puppies have been killing her chickens. Not good. And it’s true, I saw one nom-ing on a “teenager” chicken the other day. And chickens are more important to her than puppies. So, Señora Isabel doesn’t want them anymore and is going to get “rid” of them. Juan Manuel said this is very, very common in the countryside. So, one of the artisans said she’d take one of the puppies and that we could deliver it when we come next week. Maybe she can take them both!

Nick met with Juan Manuel and Viviana in the morning to go over the microloan excel document that he had built. I think Viviana learned some new things that might make her life a little easier in regards to tracking these microloans. We ate a quick lunch, then got ready to go to visit Señora Nancy, who makes large mantas, or blanket-like ponchos.

If you’ve followed along on instagram, you know that our voyage to get to the artisans’ homes have been an adventure, and today was no different. With wrong directions, poor roads, and construction, today was especially brutal. And the temperature was rising up to 90+ degrees. It was a doozy. But we finally arrived and captured her video pretty efficiently, as she had some prior engagements. The video should be interesting; her chickens were quite vocal in the background, haha. But her mantas are truly stunning in person. She’s a very important artisan to the foundation and had some great answers about her process and her work.

We came back a little early after the artisan visit, and have since collapsed on the couch due to heat exhaustion, haha. However, we both find ourselves continuing to work on Chol-Chol projects, so the day is far from over. Tomorrow should be a bit cooler, so that’s good – plus it’s Brazilian lunch day, yay!