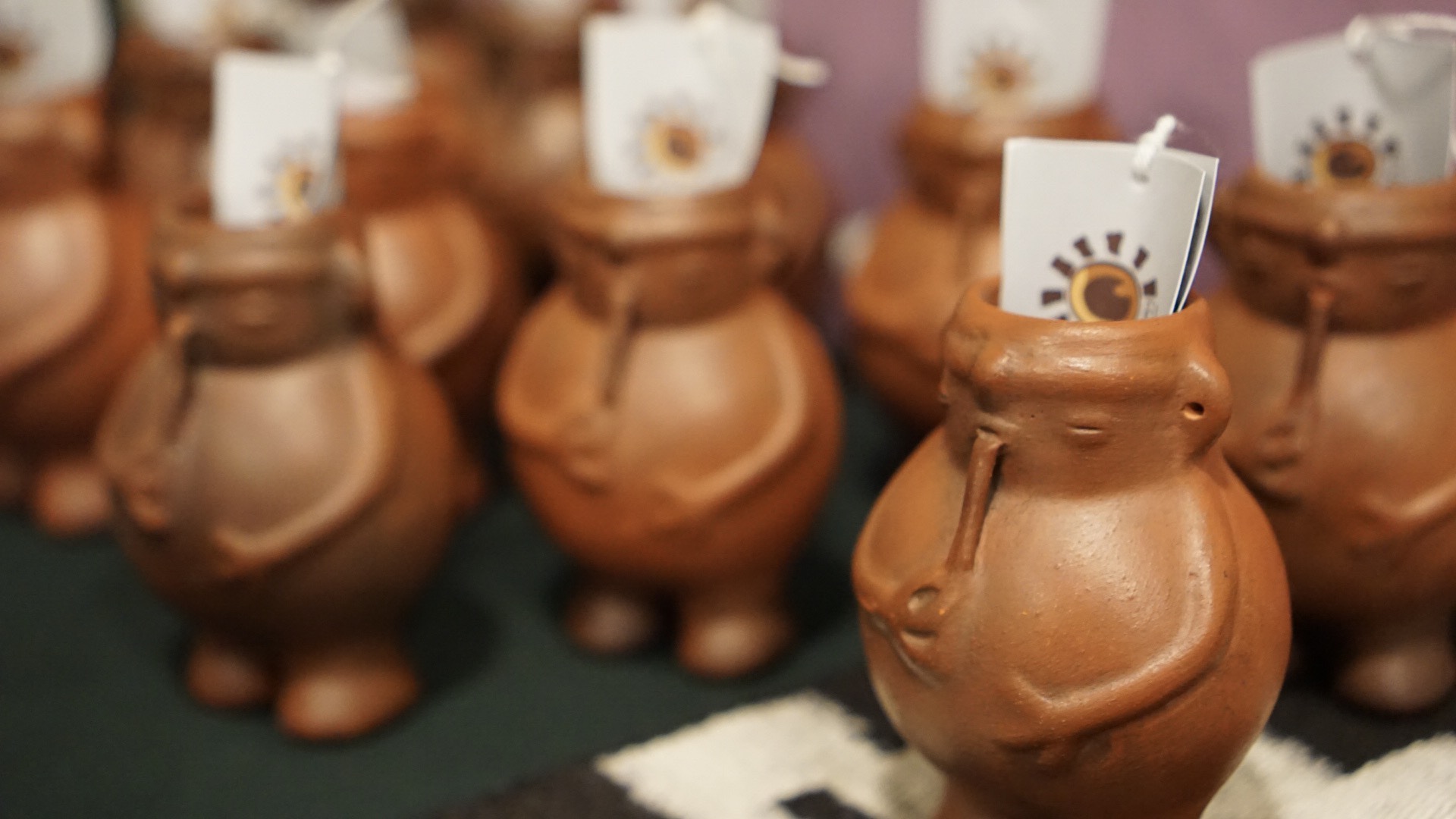 The day has finally come!

I actually woke up Friday morning a little nervous. What if the QR codes don’t work? What if the website crashes (as their provider is not reliable)? Questions like this. But I tend to be a worrier sometimes, haha.

We arrived at the museum store and the AV room was open (to the side of the museum, where the event was being held). We started moving in tables to set up the products and the drinks/snacks. Then, Yasmin pulled me aside to make a combined video of 7 artisans (5 Rakizuam/non-textile artists and 2 weavers) to show during the event. I exported those and we tested them on the large screen. All good.

While I was doing that, Nick and Kaelig started setting up some banners (actually from the International Women’s Day event). I think those banners have become a bit of a Groundhog’s Day task for Nick; he keeps setting them up and they just don’t like to stay put. But luckily, we were indoors this time and he found a good solution (a LOT of tape). Then, some Rakizuam artists arrived with some printouts from their recent trip to Cuba, so we also decorated the room with those.

The room was set up with a row of tables with products (to try out the QR codes) and a table in the back with artisan chocolates and Fair Trade Coffee from Cuba. (Oh my gosh, do I miss fresh brewed coffee. Fun fact: Chile only has instant coffee, so that’s what I’ve been having every morning here, haha). We set up chairs in several rows as Susana planned to premiere the seven videos to the attendees as an example of what kind of video you’d see when you scan a product. (And a few of the artisans hadn’t seen their videos yet!)

Those that were invited were a little tardy (Chilean time) so the artists of Rakizuam and us with the Foundation were chatting in the back of the room. Then, in a flurry, five people came in, including one newscaster and a cameraman. They set up pretty quickly, and Nick and I were a little surprised with what was happening. They started interviewing Susana about the event that was taking place and about our QR code project. It was really cool to hear Susana talk about the project that I helped bring to life, and I think everyone thought it was a great idea.

After Susana, they interviewed a representative from the government and Sandra, a ceramic artist. Then, they captured a demo of the QR codes and of everyone watching the videos we were premiering. After the videos were done, Susana said a few words about the project and the importance of fair trade for the foundation and for the artisans. She also had Nick and I come to the front of the room in recognition of our support. We did not say any words (thank goodness) because in situations like those, I usually forget how to speak Spanish, HA. The representative from the government also stood up and said a few (well, many) words about projects like these and how the government has funds to support them.

A quick side note/commentary: a lot of projects like these are funded through the government, which is great. It also sometimes creates a political angle. Susana has to create a more controlled environment for events like these (and for International Women’s Day) when there are representatives from the government. When we were talking about this event, I wanted to make it open to the public on Facebook and publicize it a little bit more, but Yasmin didn’t think it was great idea (as it was a small room and wanted to have a formal invite list). Because of that, the event wasn’t big; we had less than 20 people. It was still a great event, and I think had more of a purpose to publicize the event after it had taken place (via social media).

People stayed around for a bit and chatted, and made their way out for lunch. A fun angle for Nick and I, we did an Instagram Takeover on West Monroe’s insta story of the day:

Overall, I think the event went well! And I’m excited that the QR codes are officially “live”. And a few of artisans pulled me aside and said how much they loved the videos and how important the work is. So that made me feel good. And now, Nick and I are in the final push to finish up our projects for our last six weeks here. (Where did the time go?!)

Here’s also the clip from the news (although it’s in Spanish) but hopefully you get the idea! (We have a cameo at the 2:23 mark, ha!):